Inna Sirina or Inna Innaki was born on August 9, 1988, in Peristeri, the Athens suburb, where she also grew up. She is the daughter of a Greek father and Romanian mother. This beautiful goddess has long black hair, brown eyes, and priceless, lovely smile. The shape of her body is an example of perfection. Inna enhanced her tits in 2012 and now they are sized 36C. Her wonderful ass and long legs are the result of daily workouts in a gym. When she was in high-school, she watched a lot of porn movies and her favorite actress was, and still is famous Lisa Ann. Inna and her boyfriend, now her husband Teo, were working as strippers in Europeans nightclubs. They made their first amateur video in 2011, for Sirina Entertainment Production Company. That is how Inna’s story has begun.

From 2011 until 2016, Inna performed under the name Inna Sirina, when she had to change her artistic name because her contract with Sirina Entertainment Production Company was expired. Except for her new name, Inna Inakki, nothing has changed. She still remained beautiful, hot and wanted more than ever. The main reasons for entering the porn industry for her were acquiring new experiences, traveling, having fun and a solid source of money. During her eight years long career, she made a ton of live-cam shows, amateur videos, photo sessions and just 12 labeled scenes. She performed in solo, lesbian and hardcore actions. She made her first solo scene for the mighty DDF Network, and she was declared the hottest newcomer. The same year, she had her debut scene for American FTV MILFs website.

In 2018, on XBIZ Europa Awards, she was nominated for the best lesbian scene, which she made with Amarna Miller. In 2019, she was also nominated, but this time on AVN Awards, for the best Foreign Shot All Girl Sex Scene. That is a scene called Secret Lovers, where Kira Queen also appeared. Same year, she was nominated for a fan award for the most spectacular boobs. But let’s peek a bit in her private life. Inna has a wide specter of music genres that she likes to listen to. It is a matter of a moment and occasion, from the classic world works, over modern dance music, to the traditional Greek performers. Shopping with her friends has a special place in her life. Inna is a passionate fan of football games too. Fishing makes her happy. From all celebrities, she would like to spend the night with Scarlett Johansson.  Date posted: September 2, 2019 TheLord 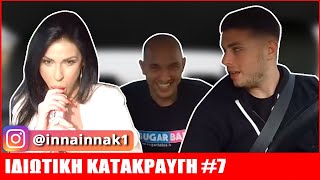 DDFnetwork
Go to top
We use cookies to ensure that we give you the best experience on our website. If you continue to use this site we will assume that you are happy with it. For full details read our Privacy PolicyOk