Alexis Fawx was born on June 23, 1975 in a small town in Pennsylvania where she grew up. She was raised in a small town lifestyle. Her family life was good. During her high school days, she was a wild child and partied a lot in Washington DC. When she graduated high school Alexis went into the military, the air force, and the she went into college. After she graduated, Alexis moved to Florida. She was in the military for almost 4 years, but left it early when her father passed away and her family needed her help. She lost her virginity very early and became promiscuous afterwards. Alexis was also with girls, but it was never serious until she was twenty years old when she had her first lesbian relationship.

She was sure that she wanted to do it and had really good time doing it. Fawx’s career started in 2010 when she was thirty-five years old. Very soon after her start, she got a contract with BangBros and the whole beginning of her career was in Florida.

This hot blonde milf is a free spirited and open minded girl. She likes guys and girls that have sense of humor, who are open minded, fun and who have life of their own as well. In her free time she likes to read, spend time with her dog, but also does adventurous things like sky diving. She enjoys traveling, boxing and she would love to learn kiting. She loves artistic films and enjoys cooking and eating. If she could sleep with any celebrity, male or female, she’d do it with Scarlet Johansson and Christian Bale. Date posted: February 22, 2017 TheLord 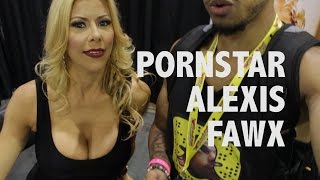 Fleshbot
Go to top
We use cookies to ensure that we give you the best experience on our website. If you continue to use this site we will assume that you are happy with it. For full details read our Privacy PolicyOk