Jasmine Jae AKA Jazmine Jae is a British pornstar. This Caucasian hottie's eyes are hazel and her hair is long and black. She has a few small tattoos, her nipples, navel and clit are pierced, and her fake boobs (she had them enhanced even before she ever considered entering the adult industry) are big (32E-27-37). She was born in Birmingham, England, on August the 31st, 1981, and she grew up in an average middle class surroundings. While she was growing up she was always a self-confident, clever and diligent person who loved to spend time on her numerous friends and hobbies (one of them was collecting stamps). While she was still a university student she worked in a clothes boutique. When she finished her studies (she has a first class honours degree in business management and marketing) she was working as a marketing manager for a long time. 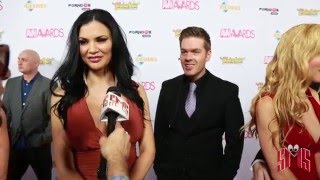 All Hip Pop
Go to top
We use cookies to ensure that we give you the best experience on our website. If you continue to use this site we will assume that you are happy with it. For full details read our Privacy PolicyOk