It’s here! This is the newest parody produced by DP is at the same time one of the hottest high-budget movies in 2017. It’s the spoof of the ninth episode of the famous Star Wars movie series and it’s something you shouldn’t miss out on if you’re a fan of porn parodies. The winner of the 2017 AVN Female Performer of the Year award – gorgeous Adriana Chechik plays the leading role of the young Jedi Padawan named Ray, but you’ll love the rest of the cast as well as they’re all handpicked for this hot movie. Just like in the Hollywood’s counterpart, Ray has to fight Kylo Ren and the dark side and destroy the First Order by beating (read: fucking) everybody that stands in her way. The force is strong with her, and so is the will to destroy the First Order, so you can count on lots of fucking with beautiful Ms Chechik. Interracial sex, lesbian and group sex action are the things you can expect to find in this sexy parody. Costumes are amazingly designed and the special effects are even better! Stellar cast and high production value guarantee you top-notch entertainment!

In the opening scene we find Ray (Adriana Chechik) practicing with her lightsaber. She can’t focus on her training because Kylo Ren (Xander Corvus) is coming to her mind every time she closes her eyes. This time in her mind she’s trapped by him and is forced to do everything he wishes. He makes her deepthroat his dick and suck his balls. The throat fucking is something Adriana has always been great at and that’s the perfect way to open this scene. After some intense throat fucking and sucking he spills his juices all over her face and that’s when she wakes up.Back at the Resistance’s HQ General Leia (Georgie Lyall) finds Finn (Antonio Black) and revives him using the Force. She also notices that his cock is hard and decides to seize the opportunity and fuck him silly. Leia’s big tits are something you will surely focus on once she hops on Finn’s big dick and starts riding it.After Rey crashed her ship, Kylo Ren and lusty Phasma (Lily LaBeau) start searching for her.  The sexy female Stormtrooper wants to help Rey because they have the same enemy – Kylo Ren, and she proves it by sucking her wet pussy. Lily also makes Adriana squirt a couple of times and licks her ass. If you like girls with big bushes going down on each other, then you’ll love this scene!Third scene shows how brave Rey has become. She confronts Kylo Ren and two other soldiers (Axel Aces and Tony De Sergio). After fighting these three men she gets subdued and fucked hard by all three guys. She’s forced to deepthroat all the cocks one by one and takes all those dicks inside her pussy alternately. At the end she takes three big loads all over her face and tits.Luke Skywalker (Erik Everhard) comes to the rescue in the last scene. After the fight Kylo Ren is unconscious, Rey is rescued, and Luke and Phasma have some unfinished business. They face each other in the closing scene and as she takes her helmet off he can’t resist her sexy look, so he fucks her face and pussy like it’s the last pussy in his life. The costumes go completely off in this scene so you can enjoy Lily’s body to the maximum. He spills his man juice all over her face and she leaves with a smile. Now it’s time for Luke to help Ray finish her training! 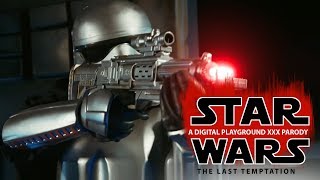